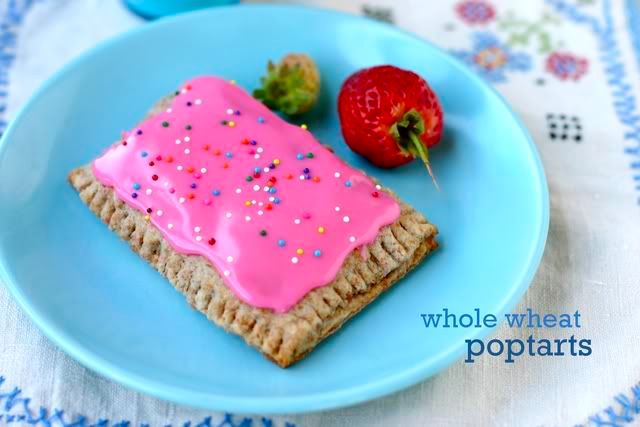 Say what you want about the state of the American government. Over the years, I’ve heard a plenty of good and bad from both sides of the fence. Elephants wagging their trunks against Democrats. Donkey’s kicking conservative Republican ideas with a hefty “hee-haw.”

It doesn’t matter which breed of voter you declare yourself to be, you’ve gotta love Michelle Obama’s declaration to fight against childhood obesity. It just so happens I adore her desire and drive to help our nation raise a healthier generation of kids. Food is so important. Good food and healthy bodies are even more so. Hurrah for a good woman using her voice to campaign for something so important. Hurrah for healthy children.

So, with my passionate testimonial officially in print, I do so hope you’ll be willing to forgive one small matter. It is the matter of what we had for breakfast this weekend. It had a rich, buttery pie crust, and sweet strawberry filling. It was glazed with shiny, pink frosting and topped with rainbow sprinkles. Of course, the crust was made with whole wheat flour. The filling made with fresh, organic berries. The frosting conjured with nary a drop of high fructose corn syrup. Homemade Strawberry Poptarts. Good heck. They were good. In fact, they were so good, they inspired my summer-riddled children to stop arguing for a moment, and gather together around the kitchen table in lip-licking peace and quiet.

Come to think of it, I ought to start a campaign of my own. I’ll call it the “Let’s Eat Homemade Poptarts for Breakfast” Movement. Just imagine…Brothers and Sisters, Madonna and Gaga, Leftists and Conservatives dining peacefully together over pink-iced Poptarts and tall glasses of cold milk. I suppose an attempt at world peace is just part of the everyday life of a food blogger.

Me and Michelle Obama, changing the world one bite at a time. 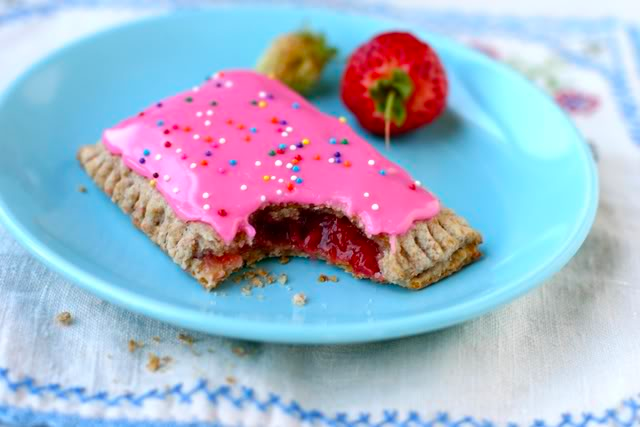 I’ve tried a lot of whole wheat pie crusts in my day. I’ve yet to find a whole wheat pie crust that bakes up soft and flaky, without adding a thick, grainy whole wheat flavor. Until now. I am finally and most officially ready to declare myself entirely free from plain old pie crust. Because this recipe is the ideal combination of butter and whole wheat, creating a pie crust that is perfectly flaky, mild-flavored, and easy to work with. Come, bake, be amazed. You truly won’t believe how incredible whole grains can be until you’ve baked them up in a pie crust such as this one.

1 C whole wheat
½ C white flour
2 t sugar
½ t salt
½ c. cold butter, sliced
4-5 Tbsp. cold milkIn large bowl, stir together flours, sugar, and salt. Cut in slices of butter using a pastry cutter (or fork, if you have to) until the largest pieces resemble peas. It’s important that you don’t touch the crust with your bare hands, no matter how tempting that mixing option might be. You want the butter to stay as cold as possible and your hands will warm it up and make the crust less flaky. Pour the milk over the mixture, one tablespoon at a time, just until moistened enough to hold the dough together. Use a fork to stir the dough after you’ve added each Tablespoon of milk. Quickly form the crust into a ball. Refrigerate until ready to use.

recipe only at The Family Kitchen on Babble.com
0 shares 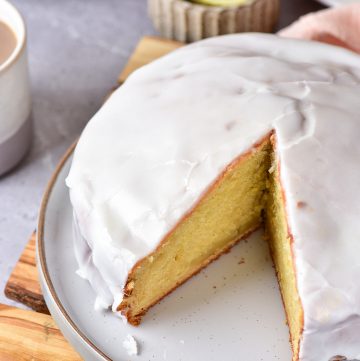 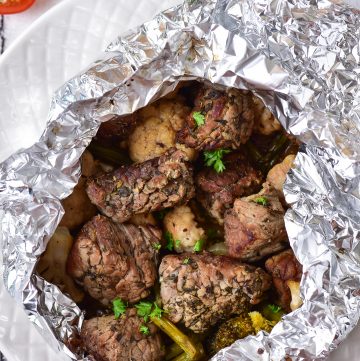 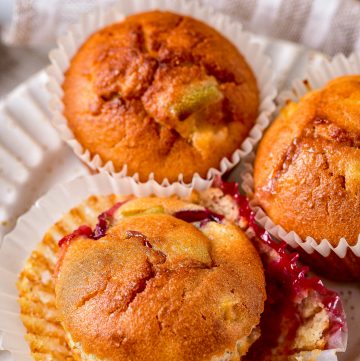