Sometimes, I’m pretty sure that I’m the best mom in the world. Apologies to everyone who thought they were in the running. I’ve got the title all tied up.
*
Take, for instance, this afternoon, when my children were all crazied out and running rampant after a morning of church. I had an idea to create two “Partner Playtime” areas. Each area was filled with two-player games, the kids were put into pairs, and they’d play any game of their choosing with their partner for ten minutes. Then, we’d switch partners and change up the rooms, and the partner playtime would start all over again for ten minutes more. The kids were totally digging it. They were giggling together, making nice memories. And I thought, “man! I just made that up!” I mean, seriously. Who does that kind of stuff? Well, I did this afternoon! Booyah. Best Mom trophy forevs.
*
Of course, there was also that instance today wherein we returned home from church to find the neighbor kids out hocking lemonade to passerbys. My kids ran over to say hello, mooched a couple of soda’s off the little lemonade-selling urchins, and sat under the heat of the August sun, sipping their soda’s. Sometime in the middle of all this summertime joy, my beloved daughter finished off her soda, and conjured the brillant idea to fill her empty bottle with soapy water, then return it to the neighbors for-sale basket. After which the soapy soda bottle was promptly sold to some kind-hearted man for three bucks. Three minutes later, he returned all red-faced and foaming at the mouth.
*
“Why did you guys sell me soap water?” he begged of the lemonade standers.
*
Baffled and unknowing, all of the children shrugged shoulders and look haplessly at each other for an answer. “Well don’t do it again, okay kiddos?” he gurgled as rainbow bubbles rose out of his mouth, illuminating the atmosphere.
*
It didn’t take long before the kids noticed a glaring absence in their group. A certain little someone was conveniently not around. No, she was sitting inside, chatting innocently with her doting mother. A mother who, upon hearing of the misdemeanor felt the familiar fall of pride. I mean, seriously. Who’s kids do stuff like that? Best Mother Title revoked.
*
After a lengthy time-out, a stern talk (during which I nearly successfully stifled a thousand giggles. Because, really, it’s pretty funny to sell a bottle of soap-soda to an unsuspecting chap), I snuck 7 different kinds of veggies into freshly made calzones. Because, hey. I might not be The-Best-Mother-in-the-World, but believe you me, I’m going to go down fighting.

Supermom or not, people are going to believe you have superpowers when you whip up this simple, delicious batch of pizza dough in about 15 minutes. The dough is soft and slightly sweet, a perfect accompaniment to these 7-Veggie Calzones, filled with garden-fresh vegetables that have been finely chopped so as to sneak past even the pickiest eater. They are so flavorful, so fresh, so good, and so easy, you won’t belive it. Hey! Maybe you are Supersonic, after all!

In a large bowl, combine water, yeast and sugar. Stir together until very well mixed and allow to proof for about 5 minutes. The yeast will start to rise and foam in the water, which is perfect! That’s exactly what you want it to do! Stir in olive oil and salt, then slowly add the flour a half-cup at a time, until a sticky dough forms. Continue to add flour ¼ c. at a time now, just until the dough is kneadable and soft, but not tremendously sticky. Begin kneading the dough until it become elastic. Drizzle olive oil over the top of the dough, and allow to sit for about 10 minutes, while you prepare the calzone dough, or until you are ready to top it with pizza toppings.

3 c. muenster or montery jack cheese, grated
Place the mushrooms, bell pepper, spinach, zucchini, carrot, basil, tomatoes, onion, garlic and salt in a food processor, and chop until very finely ground. Alternately, dice the veggies very small with a sharp knife. In a large bowl, sprinkle flour over the cheese, and stir to evenly coat. Add the chopped veggies to the grated cheese, and stir until well mixed. 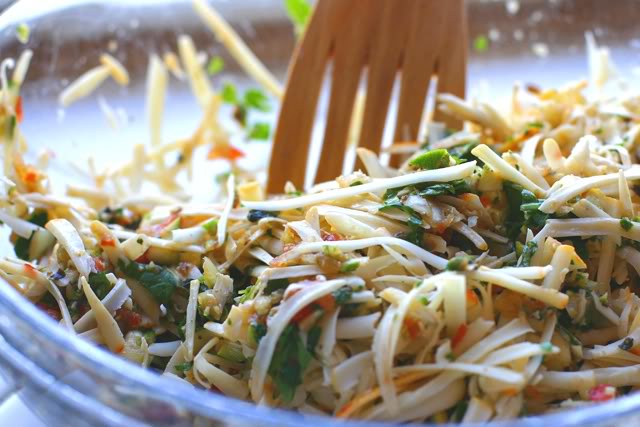 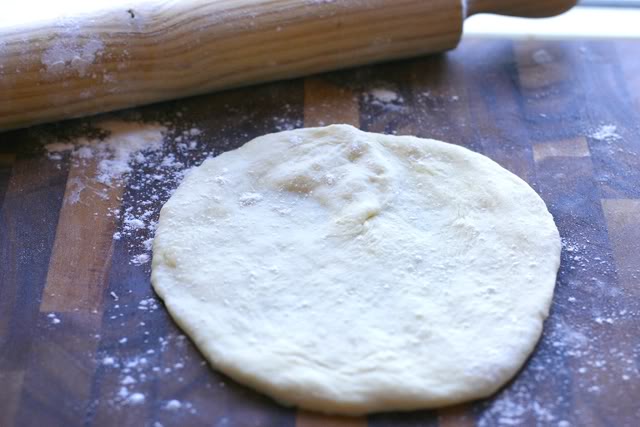 Spoon a hefty amount of cheese & veggie mixture onto the pizza dough. 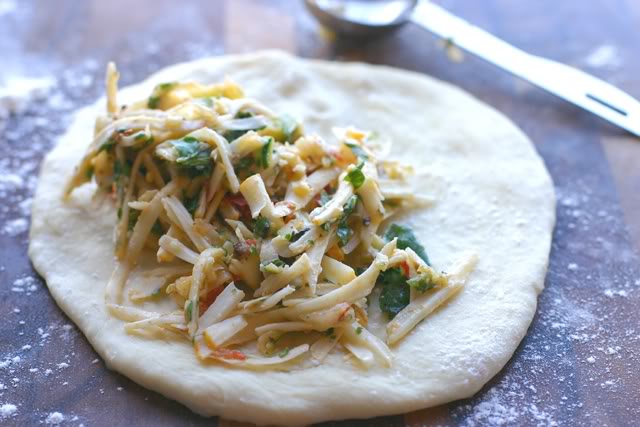 Fold the top of the dough over, and crimp the edges together firmly. 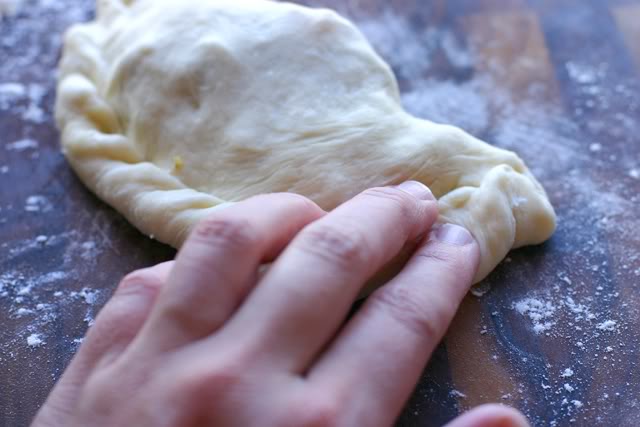 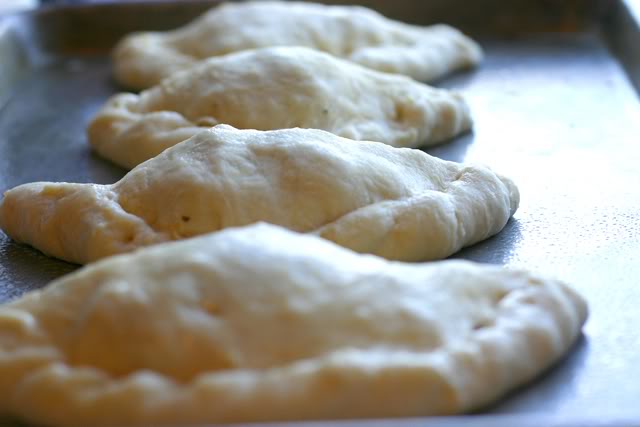 Bake in an oven 375 degrees for 18-20 minutes, or until the edges of the calzones are ever so slightly browned. Serve nearly hot. Eat & enjoy. 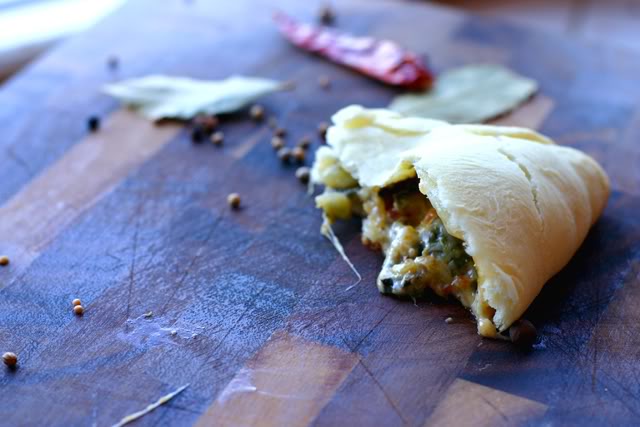 A hearty welcome to those of you arriving here from Scholastic!
Scholastic Parent & Child Magazine Aug/Sept Edition just announced Cheeky Kitchen as the 2010 Parent Blogger Awards pick for best Cooking & Craft Blog. Hurrah! Mucho thanko to all of you wonderful reader’s who cast your votes and made this incredible honor become a reality!
*
Looking for Something Lovely to Do?
How about joining my remarkable friend, Shelley, as she hosts a nationwide bake sale to benefit 16-year-old Rachel Steele in her fight against lukemia? If you like to bake, you can lend a world of good to this sweet teen. Details can be found on the event website HERE. Let’s make the magic that was Abby’s Bake Sale happen all over again, shall we?!
0 shares